A couple years ago I made a model lighthouse as a gift.  Here is a piece about how I made it and some photos of how it turned out.

First I searched for photos of pretty lighthouses online.  I reviewed hundreds of photos on Google and then finally found a few candidates.  I settled on the Peggy’s Point lighthouse in Nova Scotia.  The octagonal white structure was built in 1914 and has a red top.  I chose a flat sided lighthouse because I couldn’t easily figure a way to build a rounded shape that would come out nicely.

Next I needed to determine how much wood and other supplies to buy.  The hitch was to get the right proportions for the parts based only on a photo.  So I printed out a picture and took a ruler to it.  I worked out the ratios of heights and widths and then transferred those numbers to possible sizes in inches.

I ended up with a model about 20” high made of mostly 3/32” plywood sheets.  I bought white and red paint along with thin dowels to make the window casings and upper safety railings.  Finally I picked out mini LED Christmas lights for the lamp and thin brass wire for the safety “chain.”

I began by transferring the scaled up dimensions from my photo to plywood.  I cut the

long exterior panels on a table saw.  One early mistake I made was assuming that Peggy’s lighthouse is hexagonal.  The real light has eight sides.  From the photos I could only see three sides at a time.  The fourth side just does not show in a two dimensional image.  I was so far into the construction when I realized my error that I just decided to go with six sides.  It worked out fine and I think the final result looks good.  Just don’t compare it to the original!

I made the base, internal bracing floor, pergola, walkway railings, wire railing “chain” and began glueing all the parts together.

Making the six walls fit around the base and second floor was tricky.  With so many angles it was tough to make everything line up, but in the end it fit fairly well.  I installed the battery pack and light and then painted the whole thing white and red.  On one wall I painted in three evenly spaced blacked out windows.

Here are some more photos of the project. 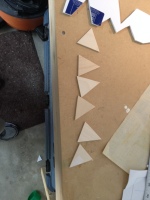 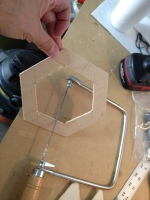 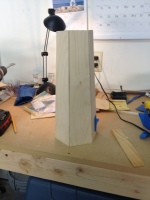 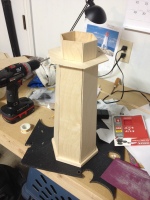